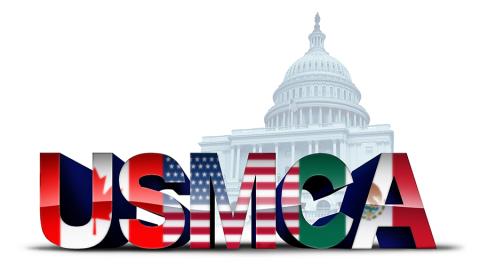 After clearing both the House and Senate, the USMCA is expected to be signed into law by President Trump next week

Various sectors of the retail and food industries welcomed the U.S. Senate’s passage of the UnitedStates-Mexico-Canada Agreement (USMCA) by a margin 89-10. Having passed this final legislative hurdle, the trade deal now lands on President Donald Trump’s desk for his signature, which is expected next week, to finalize the agreement’s enactment.

The U.S. House of Representatives approved the USMCA last month.

“The world has changed dramatically since the United States, Canada and Mexico first agreed to tear down barriers to free trade a quarter-century ago,” noted Matthew Shay, president and CEO of the Washington, D.C.-based National Retail Federation (NRF), the world’s largest retail trade association, which has been a prominent backer of the administration’s efforts to update the North American Free Trade Agreement (NAFTA). “This updated agreement will modernize trade among our closest trading partners and pave the way for continued prosperity across the borders of North America as the global economy continues to evolve. This agreement will support the millions of U.S. jobs that depend on free trade with Canada and Mexico and will ensure the continued availability of affordable everyday necessities for American families.”

Bentonville, Ark.-based Walmart Inc. also lauded the move. "North America is core to Walmart’s operations as a global company with more than 2,800 Walmart retail units in Mexico and Canada, supporting nearly 430,000 jobs, in addition to more than 5,000 U.S. stores and clubs and 1.5 million U.S. jobs," the mega-retailer observed in a statement. "Our customers and associates will benefit from the free flow of goods and services under the USMCA. In addition, new commitments on digital trade and trade facilitation will enable us to take advantage of an integrated ecommerce marketplace in North America."

Reaction was equally positive among more traditional grocers of all sizes.

“USMCA encourages free trade and the imports of vital products sold in independent supermarkets,” said Molly Pffaffenroth, director of government relations for the Arlington, Va.-based National Grocers Association (NGA), which represents the independent grocery industry. “NGA applauds the Senate for passing this important agreement that allows community-focused retailers and wholesalers to continue serving their customers while creating close to 1 million jobs across the county."

Added Harig: “Our expanded trade with Mexico and Canada has transformed grocery produce departments over the past 30 years. This transformation has taken place at the same time as new markets have opened and expanded for U.S. growers; so much so, that the United States food and agriculture economy now supports more than 22 million jobs and $152 billion in exports every year.”

Speaking of fruits and vegetables, Canada and Mexico are the two largest markets for fresh produce, according to the Washington-based United Fresh Produce Association, “and their importance to American agriculture cannot be overstated.”

“The produce industry is one of the cornerstones of the original NAFTA agreement, and its continued success is vital for the economic well-being of all three countries,” pointed out United Fresh President and CEO Tom Stenzel. “The USMCA includes important reforms that will ensure that the success of NAFTA will continue well into the 21st century. The fresh produce industry is eager for the passage and implementation of the USMCA to ensure that the growth of trade over the last quarter-century is sustained and that we build upon the investments made by businesses in all three countries. This agreement is most important as we continue to meet the demands from consumers for increased availability of healthy fresh fruits and vegetables. Finally, we believe this new trade agreement will strengthen our partnership between the three countries and provide essential cooperation in the fresh fruit and vegetable industry.”

Organizations representing other food suppliers expressed their approval of the agreement as well.

“The new USMCA deal delivers peace of mind for our businesses, removing the handcuffs of uncertainty that have constrained business decisions over the past two years as the deal was negotiated,” said Michael Dykes, president and CEO of the Washington-based International Dairy Foods Association (IDFA). “The USMCA deal is a major win that levels the playing field with our largest trading partners. It preserves hundreds of thousands of jobs in U.S. food and agriculture directly attributed to trade with Canada and Mexico. It removes several overly protective policies that had hampered U.S. agricultural exports. And it will raise U.S. GDP by $68.2 billion and pump an additional $2.2 billion, or 1.1%, into the U.S. economy through increases in agricultural and food exports.”

For dairy, USMCA preserves the Mexican market, gets rid of Canada’s Class 7 pricing program, improves market access to the Canadian market and bolsters provisions to protect common cheese names, according to the IDFA, which noted that U.S. dairy exports to Mexico and Canada came to more than $2.1 billion in 2018, or about 40% of total U.S. dairy exports.

“This historic moment strengthens our ties with key trading partners, Canada and Mexico,” asserted Robb MacKie, president and CEO of the Washington-based American Bakers Association, although he did acknowledge the organization’s “concerns regarding footnote language targeting the baking industry for enhanced inspections.” MacKie added, however, “[W]e are confident that our industry’s stellar workforce record will render those inspections moot.”

While Mexico has already ratified USMCA, Canada’s Parliament doesn’t convene until Jan. 27, and implementing legislation must still be sent to the country’s legislative houses. According to the IDFA, then, if Canada and the United States pass USMCA by spring of this year, the earliest the deal could take effect would be summer 2020.

This development is eagerly awaited by the American retail and food industries. As FMI’s Harig observed, “This trilateral trade agreement maintains and secures existing supply chains and will result in continued growth in U.S. food and beverage exports.”

Phase One to Ending The trade war

In other trade news, President Trump and Chinese Vice Premier Liu He this week signed a “phase one” trade agreement, under which the United States halved the 15% tariffs imposed on a wide range of consumer goods in September and canceled another round slated to take effect in December, while others remain in force.

While the retail industry was supportive of the move, trade groups pushed for all tariffs to be rescinded as soon as possible.

“NRF strongly supports the administration’s efforts to address China’s unfair trading practices but we hope this is the first step toward eliminating all of the tariffs imposed over the past two years,” said Shay. “The trade war won’t be over until all of these tariffs are gone. We are glad to see the phase one deal signed, and resolution of phase two can’t come soon enough.”

Continued Harden: “While this agreement offers some relief, retailers ultimately want a long-term deal that rolls back all tariffs and provides the kind of certainty and predictability needed to plan and invest while operating in a global economy. Leading retailers urge the Administration to conclude the phase two negotiations quickly to get us to that goal.”