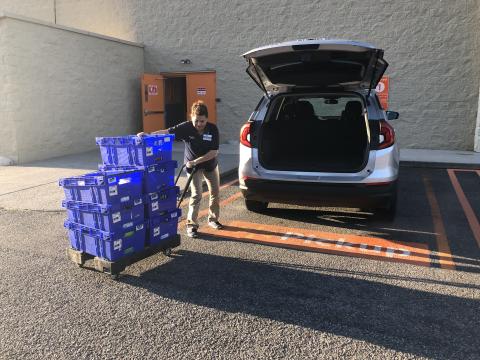 A Walmart employee loads groceries into a shopper's vehicle in Alpharetta, Ga., in May.

With average basket sizes twice the size of its typical grocery customer, no wonder Walmart is rolling out its grocery pickup service as rapidly as possible.

The head merchant from the world's largest retailer told investors at a conference this week that online grocery pickup has been a really big success.

"It's one of the reasons we're rolling it out as fast as we possibly can," said Walmart EVP of merchandise Steven Bratspies, speaking at the 26th annual Goldman Sachs Global Retail Conference in Boston. "We'll hit 3,100 stores by the end of this year and it continues to gain momentum. It's proving to be highly incremental to our business and bringing in new customers with strong repeat. The average basket size is about 2X what a standard grocery basket is, so obviously we're excited about that."

Bratspies affirmed the company would have grocery pickup in 3,100 stores and said the service is proving to be highly incremental to the company's business.

Bratspies also discussed Walmart's evolution on private brands and its strategy for revamping its merchandising of produce, called Produce 2.0. More details on Produce 2.0 will be revealed in the coming weeks.

Bentonville, Ark.-based Walmart operates more than 11,300 stores under 58 banners in 27 countries, and ecommerce websites, employing 2.2 million-plus associates worldwide. The company is No. 1 on Progressive Grocer’s 2019 Super 50 list of the top grocers in the United States.